The Republican position on undocumented workers is basically to deport them all. Round them up like cattle in concentration camps, and ship them to the other side of a humongous 2,000 mile wall. Twelve million human beings. Is that really likely? 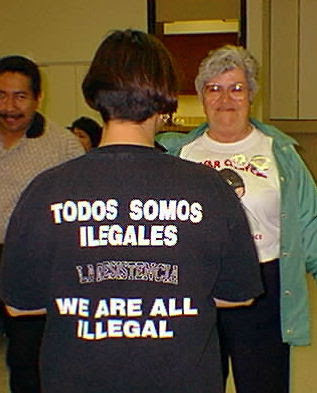 Put Yourself in Their Shoes

Let’s say you are a refugee from, for example, Guatemala. Or anywhere. You reluctantly left your home because you were facing hunger, assassination, torture, or some other kind of repression there. After a rough trip to the United States, you found conditions that were pretty terrible compared to the local citizenry, but better than conditions back where you came from.

Your life has an “underground” quality. You enroll your kids in school but, just to be careful, you don’t tell them exactly where you live. You stay out of public life in all aspects, because you worry about being uprooted or causing someone you care about to be uprooted. All this was true when you came to the U.S., it’s true now, and it will still be true after all the Republican fulminations against you.

If the repression in the United States gets worse, you aren’t likely to leave. You’ll just sink further into the underground, won’t you? Maybe you’ll take certain measures: take your kids out of school? Move more often? Change jobs more often? Change names more often? But you won’t leave voluntarily, and you won’t make it easy for ICE to find you.

If things get so bad that you can’t feed your family legitimately , there’s always crime. You can buy a gun for mugging people. A handy crowbar for burglaries is even cheaper. You didn’t want to be part of a growing criminal underground, but it’s better than watching your children go hungry, isn’t it? You do what you have to do. You didn’t make this world, but you still have to live in it.

I’m still on http://knon.org/workers-beat/ at 9 AM Central Time every Saturday. If you are interested in what I actually think, check out http://lilleskole.us