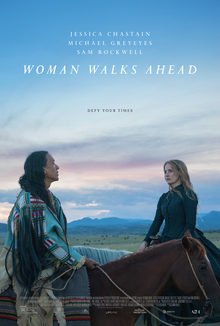 On the 4th of July, my movie buddy and I learned about people who probably weren’t celebrating the birth of this nation and all the freedom we supposedly enjoy.

Some of the historical background is on Wikipedia. The story starts in 1889 when a painter named Caroline Weldon from Brooklyn comes to the Standing Rock reservation to make a portrait of the great Sitting Bull. In this version, she stays close to him to the end of his life.

If Sitting Bull and Caroline Weldon were as sexy and good-looking as Michael Greyeyes and Jessica Chastain, their Hollywood versions, romance would be inevitable. To the credit of the movie, though, there is very little romantic diversion from the essential story about the end of the great fighting nation and its chief.

The movie makers were challenged to depict a situation of incredible humiliation, degradation, deliberate starvation, racist violence, and genocide. They did a good job of it. The results are hard to watch in places. At the same time, one has to imagine that reality at the Standing Rock Reservation had to have been far worse.

Like some of the best Westerns, this one stars the scenery. The other actors are truly wonderful. Jessica Chastain underplays her role with an admirable professionalism. Michael Greyeyes brings a great and complicated man to life. The main racist villain, Sam Rockwell, is so evil and so broadly representative of the oppressive attitudes of the time that he nearly steals the movie. His is one of those characters that viewers can almost taste and smell.

The director gets the most praise because she tells an essential American story without skipping over its horror and without preaching about it. We count ourselves lucky to have found this movie. Others may have to look hard for it.

I’m still on KNON radio 89.3 FM in Dallas TX at 9 AM CST every Saturday. If you are curious about what I really think, check out my personal site.

a member of the National Indian Defense Association “NIDA”, reached out to Sitting Bull, acting to be his voice, secretary, interpreter and advocate.