Last week, Republicans in the Texas House voted against local control because it is hateful and noxious. This week, they voted for it because it is beautiful and sacred. 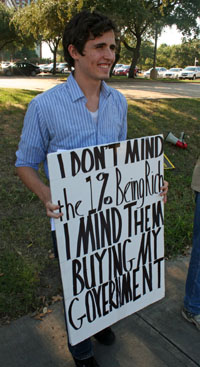 This has been going on since the Civil War, but it has nothing to do with “local control,” “states rights,” or “overreaching federal government.” It has to do with class.

The issue last week was whether or not cities have the right to adopt their own ordinances, specifically those concerning enforcement of immigration laws. The State House ruled that cities have no such right, and they, the State House, can overrule the cities any time they want to. To heck with “local control!”

Texans probably knew this was coming, because the State House in the last session, ruled that the City of Denton had no right to restrict oil companies from drilling and fracking right in the middle of town if they want to. To heck with “local control!”

But in the racist South, especially in racist Texas, “States Rights” is the Holy Quest. The Texas House voted to become the 11th state to demand the right to re-write the U.S. Constitution and enshrine “states rights” into it. It’s a lot like, in fact it’s exactly like, the same argument before the Civil War.

Big money matters to the Republicans in the Texas House. Those who are buying them body and soul want racist immigration policies and they want to undermine federal protections for minorities and other poor people. They’ll use any smokescreens they can think of, but it’s the big money that matters.

On Saturdays at 9AM Central Time, I’m on 89.3FM in Dallas and http://knon.org everywhere.