I liked a great deal of what I saw at the Texas Democratic Party convention in Ft Worth on June 22, but not everything. 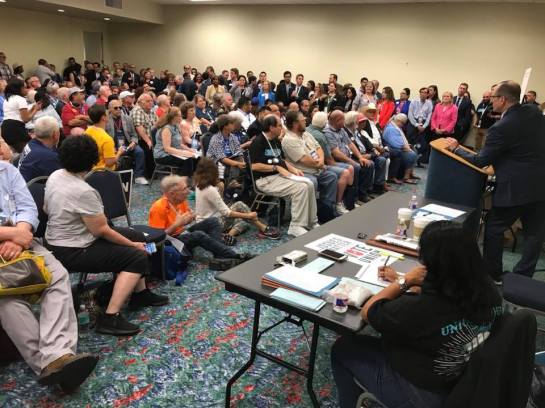 The first thing we attended was the Labor Caucus. Texas AFL-CIO President Rick Levy presided over a completely packed meeting with people standing three deep along the back and sides. I caught Levy’s opening remarks on “Facebook Live” where you can see them at https://www.facebook.com/gene.lantz.7.

Just about every critical candidate in Texas was there seeking union help. Levy could only recognize most of them briefly due to time constraints. The ones that he introduced to the podium were the most critical statewide candidates such as Lupe Valdez for Governor. 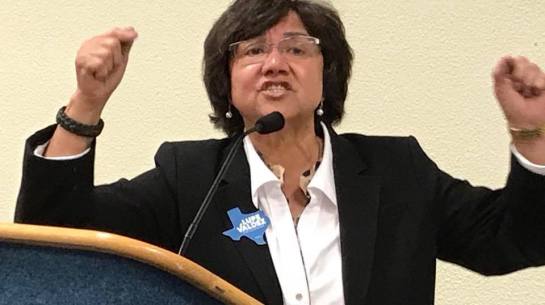 I noticed at least two unions had bought ads in the Democrats’ brochure: CWA and UAW. The Texas AFL-CIO booth in the Exhibit Hall was abuzz with activity. They took polaroids of people posing in front of their big slogan, “I’m union, I fight, I vote!’ It has a “big fist” image, to show power and commitment.

Labor’s big impact on the Democrats was evident everywhere. It doesn’t mean that labor is in their pocket, it actually means the opposite. Texas Democratic Party Chair Gilberto Hinojosa likes to say that Labor and the Democrats are “joined at the hip,” but in truth labor’s activities are very much our own. In this photo, you can see Texas AFL-CIO President Rick Levy thinking carefully while Hinojosa speaks to the Labor Caucus. 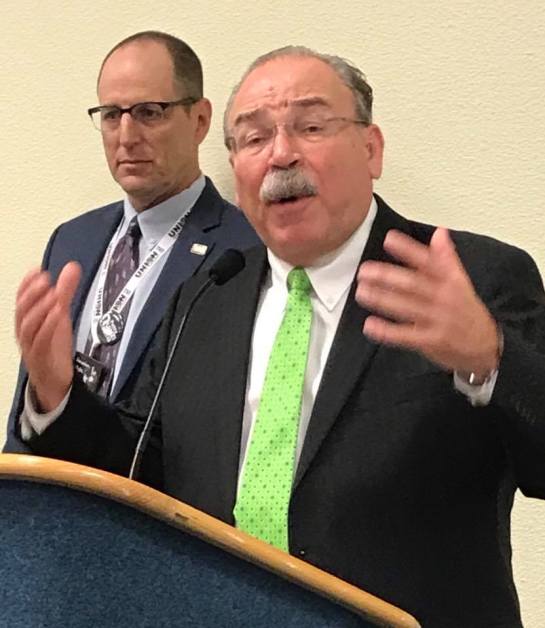 The deep polarization in America is causing working families to support Democrats. Recent news reports show Republicans trying to implement $6 trillion in cuts that would affect working people, less than a year after their big tax giveaway of more than a $trillion$ to the wealthy. The Texas Republican Party’s platform, just finished June 18, is a kick in the face to working families, and especially to our children.

In their exuberance, the first dozen or so speakers at the Democrats’ convention emphasized two main themes: immigration and gun violence. These are hot-button issues today, to be sure, but they are issues that the Democrats already own. The Republicans have generously donated those issues and those voters to the Democrats.

But what about fighting the corporate takeover? What about America’s three ongoing wars and attempts to coerce and undermine other nations? What about America’s disgraceful top-of-the-world prison population? What about taking concrete steps to end the health care hodgepodge and support Medicare for All? What about saving the state’s environment in the face of rampant oil well fracking and nuclear waste dumping? I didn’t hear those issues, except for some vague emotional appeals here and there.

The inescapable conclusion is that the Democrats are not ready to forego big corporate campaign donations any more than the Republicans are.

What will you do?

I realize that many of America’s best activists have adopted the age-old goal of trying to take over the Democratic Party. I hope they do, but history tells us that it isn’t likely.

Supporting working families, not candidates nor parties, is the way to go. It may be true that nearly all of labor’s candidates in 2018 will be democrats, and it may be true that an individual activist can be more effective short-term working directly for candidates than he/she might be while working for the AFL-CIO, but that would be a major long-term mistake.

The electoral arena is only one of many, and we must choose labor in every one!

If the goal is to make serious change, activists must recognize that only workers can do that. They are the only ones who can stand up to capitalists. A few years ago, one could not have been blamed for feeling that the AFL-CIO and unions in general were not rightfully the leaders of the working class, but that is no longer true and has not been true since 1995. The AFL-CIO today truly works for the entire class and strives to organize everybody.

That’s the team we should join!

I’m still on KNON radio 89.3FM in Dallas at 9 AM Central Time every Saturday. The “events” tab on the web site leads to recent podcasts. If you want to know what I really think, check out my personal web site.