Jonathan Rosenblum led the long campaign that ended when Sea-Tac, Washington, won a $15/hour minimum wage. Even if he had never done anything else, everyone should read his book. 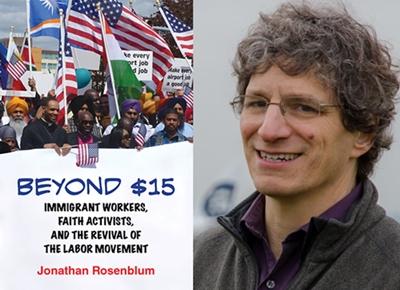 But he actually did a lot of other things in thirty-odd years as an organizer. He’s on Wikipedia at https://en.wikipedia.org/wiki/Jonathan_Rosenblum_(activist).

I knew Jonathan when we both headed local Jobs with Justice chapters. As I recall, his statewide group included five successful chapters fighting for justice along with unions, churches, civil rights organizations, and community groups. Both of us were at the Battle in Seattle.

Jonathan was working for the Service Employees Union (SEIU) when he helped bring about the ground-breaking miracle in Sea-Tac. But his success came from the Jobs with Justice approach of bringing everyone together, union or not, to focus on a common problem. It’s something that almost all organizers talk about, many of us try, and very few have actually found their way to victories. On the other hand, traditional union organizing drives have been failing for decades.

During my own 25 years with Jobs with Justice, I joined many many union campaigns. All of them welcomed my help and the help of the diverse organizations and spokespersons that I worked with. I can’t think of a single union, though, that significantly accepted our input in the process. We were always helpers, and willing helpers at that, but never partners. That’s the difference in the Rosenblum approach.

Without going into historical reasons for it, Rosenblum blames the “business unionism” that took over in the United States in 1947 and continues today, for our failures and our diminishing union density. He doesn’t overlook the all-out anti-worker government initiatives that have prevailed since 1980, in fact he describes the assault concerning the airline industry in detail, but he thinks that today’s unions could cope a lot better than we have.

Coping with the joint business/government offensive against working people is not just a matter of making a few adaptations. Rosenblum believes that present union structures are doomed to failure and must be rebuilt on a new basis of solidarity with all workers. He doesn’t comment on the present efforts of the main labor federation, the AFL-CIO, in a strong progressive direction, and that is possibly because his SEIU union had split away.

I don’t know if my own endorsement would mean anything, but I 100% agree with the following quote about our complete misunderstanding of the bargaining process:

Page 164: “In my experience bargaining union contracts and negotiating with politicians, I found that labor negotiators – both paid union staff and also union members – nearly always overestimate the importance of what happens at the bargaining table. The process of negotiating can become all-consuming. In that environment it becomes natural for participants to overvalue factors like the strength of the spokespeople, the authority of facts and data, the logic of the argument, or your relationship with your management counterpart. You begin to believe that the bargaining room is the center of the struggle. But it’s not. It’s just the place where workers reap the rewards of the pressure that they’ve been able to imposer on an adversary through collective workplace or street action, economic or political leverage, and media coverage. And the bargaining rewards will be in direct relationship to the amount of power that workers have been able to exert away from the table.”

Leadership is knowing what to do next. Unfortunately, Rosenblum can’t offer a “cookbook” for success in all campaigns. He offers a lot of inspiration and some very general guidelines on his last page:

Pg191 (last page summary): “Big change won’t come from the brilliance of individual leaders or a political masterstroke, but rather by combining the thousands of acts of simple courage and grace that on their own may seem inconsequential, but together make for wholesale transformation. From these daily lessons, from the wreckage of our present circumstances, we can create a new labor movement, win back power for working people, and build a just society.”

I’m still on knon.org at 9 AM Central Time every Saturday. Podcasts for the last two weeks are available from the “events” tab on KNON’s home page. If you want to know what I really think, check out my personal web site.