I waited in line to get this at the public library.  How’s this for a stunning first sentence: “In the beginning, nearly fourteen billion years ago, all the space and all the matter and all the energy of the known universe was contained in a volume less than one-trillionth the size of the period that ends this sentence.” 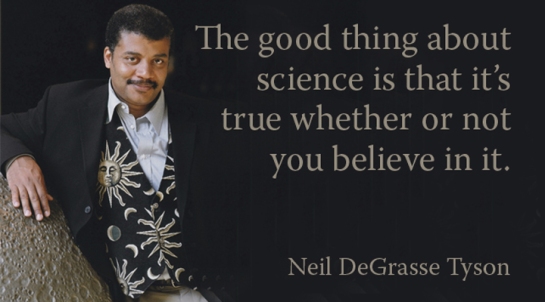 He goes on to attempt to explain the incredible knowledge gained over the ages about our universe. There are some giant numbers involved, and he tries to make them understandable, or at least acceptable, with folksy comparisons, as in the opening sentence.

He doesn’t directly answer the question “What’s outside outer space,” nor “What happened before time began,” but I didn’t expect him to. They are trick questions.

I was disappointed that he did not mention the idea that the expanding universe has no center or starting point. I think I heard him say that once on television. I can’t understand how everything could have derived from a “big bang,” if there is no central point from which everything is expanding away. But then, there are a lot of things I didn’t really understand as I read through Tyson’s short book.

Tyson’s ruminations on how humans are affected by an understanding of our place in the universe are worth the whole book. Tyson once did a television series in 2014 on Fox called “Cosmos, a Space Time Odyssey.” Earlier, in 1980, Carl Sagan had done “Cosmos: A Personal Voyage” on PBS. One might learn more from them. The best details I found just by clicking the links around Wikipedia’s “Astrophysics” entry.

Astrophysics is a topic of interest to anyone interested in religion. The obvious contradiction between Tyson’s entire book and the first lines of the Holy Bible causes a scramble for some kind of resolution. Tyson doesn’t concern himself with it at all, but he makes his attitude clear on page 206, near the end, when he is listing attributes of a “cosmic perspective:” “The cosmic perspective is spiritual –even redemptive – but not religious.”

I talk about the world from a worker’s view on KNON radio at 9 AM Central Time every Saturday. Click the “events” tab to find the last two hourlong programs. If you want to know what I really think, check out my personal web site.