There’s no denying the tremendous effect that the Bernie Sanders movement has had on the body politic. Will it continue? Will the various aspects of Sanders’ progressive program be won? 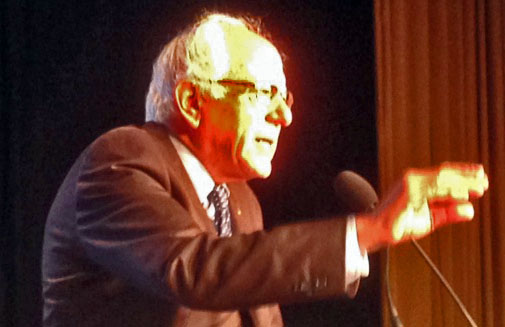 A couple of factual observations: Sanders mentioned doing political actions outside the sphere of electoral politics. I could see petitioning campaigns, possibly boycotts, some strike support, and street heat actions being carried out by enthusiastic young activists and I really like the idea.

Sanders didn’t mention “Brand New Congress” at all. Click here for my article on them. This organization started a couple of months ago with a scheme to elect 400 “corruption proof” congresspersons in 2018. I’d love to see that happen, but I was a little skeptical when they said they were the heirs of the Bernie movement. I was waiting for Bernie to say so, and he didn’t.

Sanders did mention organized labor in a positive way, and many of his proposals are also the proposals of the AFL-CIO.

One last factual observation: We’ve seen this before. Going all the way back to the “Deniacs” of Howard Dean, we’ve seen progressive presidential candidates try to extend their movement beyond their candidacy. The worst one, in my own opinion, was Organizing for America, which was supposed to harness the amazing power behind the Obama 2008 campaign. I call it the worst one just because of my local experience here in Dallas, where OFA completely ignored every organization and movement in existence and put on separate, isolated, events that didn’t necessarily relate to the local situation.

WHAT CAN WE EXPECT?

I think the Bernie movement has tremendous potential because of its youth support. We’ll probably see the first test of the movement right after Labor Day, when the “lame duck” congress tries to pass the Trans Pacific Partnership (TPP) unfair trade deal. (Click here for my piece on trade). It’s well established that most Americans and both presidential campaigns oppose it, but the corporations want it, so don’t be too surprised at what happens.

If the Bernie forces mobilize and get past the TPP test, they may come up with a winning formula for continuing. But there are a lot of obstacles to holding the movement together without Bernie at the helm. The movement started fragmenting as soon as the presidential campaign ended, and it’s still degenerating with little splits and big. I suspect the Brand New Congress people weren’t very happy with the August 24 performance, for example.

HOW CAN WE BUILD MOVEMENT THAT CAN WIN?

There aren’t really any charismatic leaders or ambitious programs that can stand up to corporate money power. I love them and I support them, but I don’t count on them. The essential problem in modern society is the conflict between the bosses and the employees. If we stick with the employees’ side, we won’t go wrong.

Do You Hate Both Candidates?In “elections”