The Communications Workers of America is doing what unions almost never do — studying the actual mechanics of American capitalism and figuring out how to fight it! They are distributing and studying a book by Les Leopold of the Labor Institute. 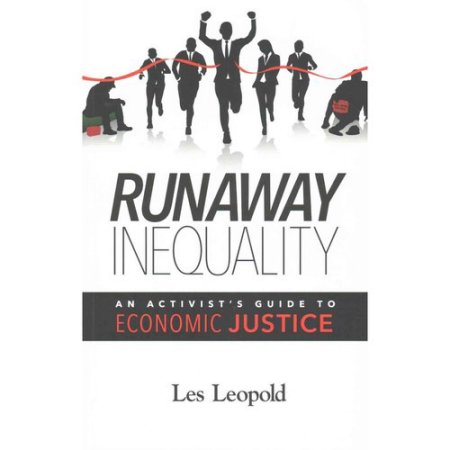 The foreword by CWA President Chris Shelton urges all union members to read the book. Shelton is also quite specific in recommending an electoral strategy: “…we need to build our own, independent, anti-corporate, pro-union, political organizations! Wall Street has two parties. We need one of our own.”

He recommends the Working Families Party, (click here) which already exists in 10 states. Could this be the labor party that American progressives have been begging for since forever?

The fact that one of America’s largest, best distributed geographically, and most vibrantly active unions is putting this body of information out is significant. It’s also a timely prescription for the national illness. The negative images of Donald Trump and Hillary Clinton are moving people away from the traditional two-pronged capitalist political system while the hopes aroused by the Bernie campaign are still not settled on a program and course of action.

Most of the book consists of graphs and explanations of the wealth gap and income gap that have become deep chasms since around 1980. Most of us have seen some of this striking data before, but nowhere is it presented so thoroughly and connected so well to an underlying cause. Around 1980, when Reagan was elected, America’s ruling elite adopted an extreme anti-worker and pro-corporate program that included deregulation, tax cuts for the wealthy, service cuts for the poor, and attacks on unions and democracy in general.

We have all felt parts of this ugly program firsthand, but Leopold’s book connects the parts into a whole, then begins an optimistic discussion on what we can do about it.

Let’s Get Behind It!

One could make an intellectual discussion about the better or worse aspects of Leopold’s book, but doing so would be frittering away an opportunity that the Communications Workers are giving us. Here’s a chance to join in an educational process that can give immediate direction to the progressive movement. We can’t afford to miss it!