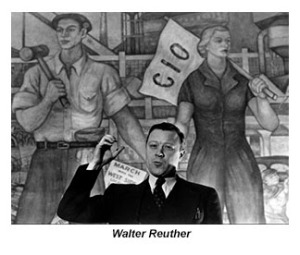 Walter Reuther is a pivotal character in labor history

Most union histories say little about the Taft-Hartley law except that unions opposed it, Democratic President Harry Truman vetoed it, and the Republican Congress passed it anyway. It was the axis about which the American labor movement swung from highly progressive and successful into a long downward spiral.

The law signaled the end of the cooperation between labor and progressive Democrats that produced such landmark improvements as the National Labor Relations Act, Fair Labor Standards Act, unemployment compensation, workers compensation, and Social Security. It was the first big anti-labor law to pass since 1932. It’s intent was to greatly weaken and isolate organized labor. It worked great!

Taft Hartley hit labor like a tsunami. It destroyed whole unions, many careers, and many lives. Combined with the “Iron Curtain” speech of the previous year, it dovetailed into the witch hunt that sapped American culture for the next decades and is affecting us still. Like a tsunami, though, it also lifted some boats. Opportunists took over the unions.

Communists and socialists had played a major role in building the Congress of Industrial Organizations (CIO). Taft Hartley made it illegal for them to serve as union leaders. Some of them disavowed their previous connection, some of them kept their principles but lost their careers, a tiny few held fast and survived, but at great cost.

Walter Reuther and the CIO expelled 14 unions for refusing to give in to Taft Hartley. Then they raided them. Only two survived: the United Electrical Workers  (UE) and the International Longshoremen and Warehousemen Union (ILWU). Both of them remained vigorous and progressive through the long period of growing isolation of organized labor. Both of them stood up for civil rights and against war when neither was generally popular. Both of them stood up for  solidarity when most unions increasingly adopted “go it alone” as their credo.

Prior to 1947, the CIO was the point of America’s progressive spear. They were internationalist. They pushed hard for improvements in Social Security for all. They demanded national health care for all. They demanded a shortening of the work week for all. After 1947, the union movement forgot the shorter work week, and they accepted company proposals for employer based pensions and health care. Union members continued to get higher salaries, better pensions, and solid health care into the 1970s while the rest of the working class did the best they could.

In 1980, when the employers and the government turned viciously against their old buddies running the union movement, we were largely friendless and almost helpless! Walter Reuther, who was probably the best of the mainstream union leaders, had been killed in 1971, right after protesting Nixon’s handling of the Vietnam War. American union leadership didn’t fully adapt to the hostile new situation until 1995 when the AFL-CIO, for the first time in a century, did not let the outgoing leadership pick its replacements.

The new leadership has been turning things around. It’s a hard job, but it’s working. Our days of isolation are over and the sun is shining on organized labor today. Taft Hartley wounded us severely, but not mortally.

Here’s how Eugene Victor Debs once put it: “Ten thousand times has the labor movement stumbled and bruised itself. We have been enjoined by the courts, assaulted by thugs, charged by the militia, traduced by the press, frowned upon in public opinion, and deceived by politicians. But notwithstanding all this and all these, labor is today the most vital and potential power this planet has ever known, and its historic mission is as certain of ultimate realization as is the setting of the sun.”