On the day after the election, small groups of demonstrators hit the streets in a number of American cities. I just got a request that I join a call for a general strike — a national work stoppage — on Inaugural Day. I call this kind of non-thinking acting-out “knee jerk activism.” It’s more traditionally called “ultra-leftism” and has been correctly labeled, “the infantile disorder.” 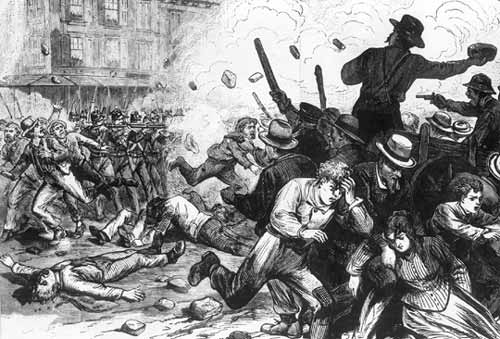 We had a tremendous general strike in 1877

Union activists are used to hearing people call “strike!” when they have no idea whether or not the tactic would work. A lot of them don’t care. If a union called a strike every time some hothead wanted one, we’d get a lot of people fired for nothing. When my union ran a successful 15-month “work to rule” contract fight, there were people calling “strike” instead of doing the hard work of a long struggle. The three of them that I knew personally were all promoted to foreman immediately after the union won. They were company stooges, as it turned out. The company knew that the union might win the long battle, but we would almost certainly have lost a strike.

If you’re reading along in Facebook, you’ve seen lots of responses to the Trump election victory, and nearly all of them are way less than helpful. Some are silly, and some are outright dangerous!

First, Figure Out What Happened

Nearly all the pollsters were wrong about the election results. The best single explanation I’ve seen was in a “letter to editor” in today’s Dallas newspaper. A guy named, I think, Roland Young wrote that when the pollsters called, “We lied!” Some of Trump’s voters may have been too ashamed to confess.

But the best explanation of the pollsters’ failure is that their approaches are based on previous history, and the 2016 presidential race was, to state it modestly, unique.

Elections are the best evidence we have of the national character. If the Electoral College puts Donald Trump in office, does that mean we’re mostly chauvinists like him? Actually, more than half the electorate voted against him, and only 56% of all eligible voters went to the polls at all. The ones that went voted for marijuana and higher minimum wages by much better margins than they voted for Trump.

Everyone who voted for Trump did not do so because they wanted to express their chauvinism. They surely didn’t vote for him because they think his far-flung ideas are actually going to solve America’s problems.

What They Wanted Was Change

I think it is fair to say that they voted for change. We see this in the unions all the time. Members who haven’t taken the time to investigate the candidates in union elections will nevertheless vote to “throw the bums out” against whoever is in office. Next election, you can’t find anyone who admits they voted for the incumbents and it’s “throw the bums out” again. After a lifetime in the public eye, and because of the outright duplicity of the national Democratic Party, Hillary Clinton was a perfect target for that kind of sentiment.

People voted for Trump over Clinton for the same reason that they had voted, in 2008, for Obama over Clinton. Change.

People voted for Donald Trump because they are dissatisfied with life in America and they don’t know what else to do about it.

I don’t exactly blame them. I’m dissatisfied too, but I know what to do about it.

Educate and Organize the Working People

Media pundits are blaming “white blue-collar workers” for electing Donald Trump. His voters were probably Anglos all right, but they didn’t represent the working class. The working class is the solution, not the problem. The progressive leadership of the AFL-CIO is head and shoulders above any Democratic or Republican Party politician. For now, it’s better to follow them than Bernie Sanders, too.

If we’re willing to do the long hard work of educating and organizing America’s workers, we could win elections. We could win strikes, even general strikes!

But it will take some work.

Click here if you want to know what I really think!