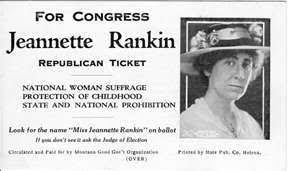 According to the intro, Norma Smith wrote this in the 1970s. She died in 2001, before they decided to publish it. She developed the information by research and visiting Rankin several times in the 1970s. It seems suitable to read this book in late 2018, because the mid-term elections put a record 100 women into Congress! But once, there was only Jeannette Rankin.

I was impressed with the historical value of this volume. I know a little bit about some of the historical events involving Rankin, but this work brings it together and contributes valuable information.

I especially like trying to understand the transitional nature of politics during and after World War I. Up to 1916, African Americans and other progressives generally supported the Republican Party because they won the war to end slavery. The Republicans lost some of that vote because of overt racism during the T.R. Roosevelt administration. Major African American leaders such as W.E.B. Dubois switched to the Democrats during the 1916 presidential race partially because President Wilson said he had “kept us out of war.”

Rankin was a major mover of the suffragette movement. She was a congresswoman twice. She stood up for many social programs benefiting, especially, women and children. She was an important part of the pacifist movement and is the only person to have voted against both WWI and WWII. Each of those votes ended her political career at the time, even though she had been elected both times by anti-war voters. I guess that’s how fast public opinion can change.

I’m not sure what it means, but Rankin was a big disappointment to the feminist movement of the 1960s. I think she opposed the Equal Rights Amendment! By the time she died, women did not esteem her. Anti-war activists certainly did, though, because she lived long enough to add her voice to protests of the American adventure in Vietnam. 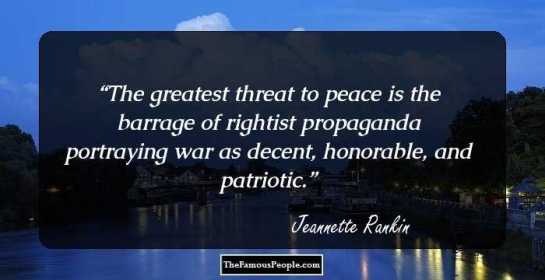 Earlier, Rankin was smeared in many different ways. Anaconda Copper was one of her enemies, and they controlled most of the press in Montana.  Among the slurs against her was the often charge of communist. According to this book, she could not have possibly been a disciplined or consistent communist, because she voted, during her second term, to extend the Dies witch-hunt Committee. It changed its name to House Un-American Activities Committee (HUAC).

There were some intersections between Rankin’s life and that of my personal hero, Frank Little. She was born in Missoula, and apparently lived there when the IWW carried out its first big free speech fight. She came to Butte within weeks after Frank Little’s lynching. She apparently did not publicly approve of Little, but she decried the manner of his death.

I knew that the suffragette movement was fractious and I knew that FDR had to overcome a lot of resistance as he maneuvered the United States into World War II, but I’d never seen the detail that I find in this book.

There are a lot of other interesting historical people in this book. Texans may be interested in Rankin’s long friendship with Maury Maverick of San Antonio. Maverick wrote her that she had done the right thing in voting against WWI, but he wrote that he had changed his position because WWII was different. He wanted her to vote for war, as almost everybody did after Pearl Harbor. She stuck to her guns and voted against it anyway. It’s interesting to speculate about her motives and what might have happened.

One of the things I didn’t know is that FDR had already moved to wreck the Japanese economy months before Pearl Harbor. According to this book, FDR left them little choice but to attack. Rankin generally did not support FDR.

As far as I can figure out, Rankin’s politics were inconsistent, as middle-class politics generally are. She was remembered as an eccentric in her personal life and in politics. But I don’t think anybody ever accused her of following somebody else.

I’m on KNON’s “Workers Beat” radio program 89.3FM in Dallas and on-line at 9 AM every Saturday Central Time. If you are curious about what I really think, check out my personal web site