The Economic Policy Institute recently ran a couple of good studies about wages. 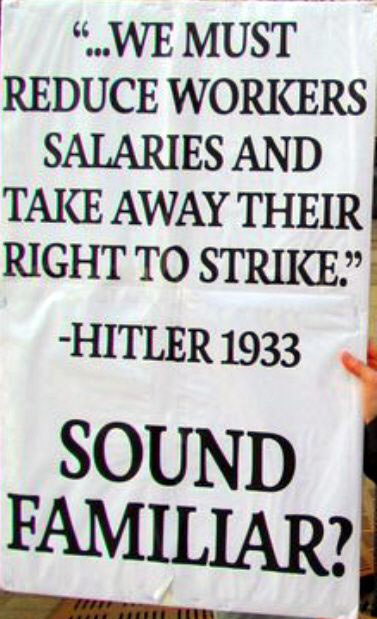 Here’s another question that bugs the heck out of my friends who work in aerospace but are members of the Auto Workers Union: “Why do auto workers get much better contracts than aerospace workers?” We work just as hard and have had as much or more training. We have the same national union leaders, the same history, and the same intentions, but our wages and conditions have never been as good as theirs. Why?

It’s Not the Work, It’s the Organizing

Manufacturing workers are easier to organize than other workers. There are more of them in one place. They work closer together. They live closer together, They have more of the same interests. Contrast, for example, techies. Techies are notoriously hard to organize, even though they may really want a union. They live all over the place. They work almost entirely alone. Some of them actually work at home. They tend to travel for work. They don’t usually advance within the same company, but move from one company to another for advancement. It is very hard to organize techies.

The easier we are to organize, the more likely we are to have a union and thus get better wages.

Aerospace workers can cuss the auto workers all they want, but the fact is that auto workers were easier to organize. Assembly line production calls for the highest levels of cooperation among workers. Take just a few of the workers off an assembly line, and it has to shut down!

Airplanes, for the most part, aren’t made on assembly lines. It’s hard to win a strike in aerospace, but it’s much easier in auto. Better organizing, better contracts!

Why Is the Gap Decreasing?

EPI says that the gap between [organized] factory workers and everybody else is decreasing since 1980. I almost laughed when I saw that date. 1980 is the year that American government set new anti-worker policies and elected its best enforcer —
Ronald Reagan. So the question answers itself.

Unionism in America has atrophied beneath the government assault, and the advantage of unionism is not nearly as widespread as it was pre-Reagan. We fell from 35% of the workforce to the present 11%. Union workers still make way more money than non-union workers doing comparable work, but there just aren’t that many union workers left to bring up the statistics.

Whose Wages Are Rising?

Last month, Wall Street had a minor panic when it was announced that wages were rising for the first time in recent history. They were barely rising, but they were slightly higher than inflation for that same period. Since then, economists and political pundits have been saying that wages will continue to rise and that the government will have to take steps, such as raising interest rates, against the trend.

Capitalists may say otherwise, in fact they do, but they do not want wages to rise.

But wages did, statistically, rise a little bit in February, 2018. The reason was that some local and state governments, responding to political pressure from working people, were beginning to raise their minimum wages. An increase for low-wage workers has a profound effect on statistics, because there are so many low-wages workers. Also, all wages tend to rise when they are pushed up from the bottom.

Nineteenth century writers Karl Marx and Frederich Engels noted that workers would tend to benefit themselves more by organizing politically than they would by fighting the bosses one company at a time. It’s not a new idea; it’s just a true one.

There are a lot of references to “the line” in literature. There’s the “red line,” there’s the “line in the sand,” and there’s the “picket line.” If you want to get someone to answer the question “Which side [of the line] are you on?” just ask them if they support increasing the minimum wage. It cuts through a lot of verbiage.

Even though unemployment is statistically low, and the time is ripe for organizing, your own wages aren’t likely to rise much until you actually organize. Either organize a union on the job or organize politically to raise wages. That’s the road to success!

I’m still on KNON.org 89.3FM in Dallas every Saturday at 9 AM Central /Time. If you want to know what I really think, check out my personal web site.