January 28 was significant for learning about immigration and refugees. 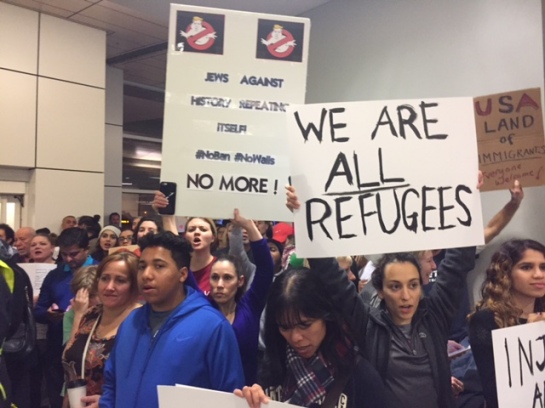 On the day after President Trump spit in the face of a large world religion, we were confronted with a dramatic historic page-turning and an opportunity to learn a lot.

There are a wide range of positions

Americans are divided on this issue. Positions range from outright racism and jingoism — hating all foreigners — up to my guest on the “Workers Beat” program on http://knon.org and 89.3FM in Dallas. Joshua Hatton gave his position as “abolitionist” and compared it to the brave Americans opposing slavery before the Civil War. They, too, helped people move from South to North, and they, too, opposed any effort to deport people back. The Fugitive Slave Act, tested in the Dred Scott decision, is said to be a major cause of support for the Northern side in the Civil War.

There were so many calls that I didn’t get to ask him if there were any difference between his “abolitionist” position and the old “sin fronteras” socialist position. “Sin fronteras” means “no borders.” In other words, workers could move back and forth across national borders with the same ease that capital does.

The argument is that national borders were created and operated by capitalists to defend their interests and are actually a hindrance to working people on both sides of the border. In 1999, the new leadership of the AFL-CIO labor federation, changed from “deport them all” to “let them in and then organize them.” In other words, solidarity is our strength and division is our weakness. Still, I expected most union people, and most politicians, too, to duck the issue as much as they could, since nobody wants to fight when your own people are divided.

Some politicians really stepped up

Congressman Marc Veasey of Dallas/Fort Worth has been saying for some time that he opposes Trump’s anti-immigrant actions. He held a meeting on that fateful day, January 28, at Kidd Springs Park. The subject was DACA — Deferred Action on Childhood Arrivals. He had a young woman, Diana Radilla, tell what it was like to be raised undocumented. He also had Congresswoman Linda Sanchez from California. They spoke up strongly on keeping DACA intact. 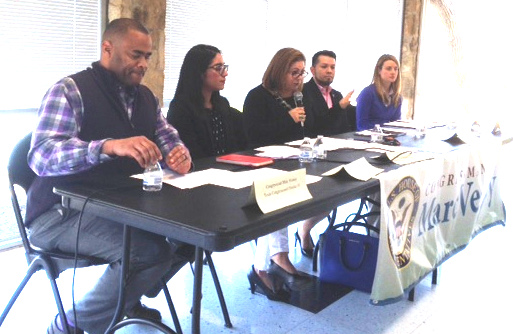 I didn’t realize that morning that crowds were forming in airports. That evening, when I did find out and went to the DFW airport to join the protests, the first person I saw was Marc Veasey. The second was our Dallas County Judge Clay Jenkins. Here were two leading Democrats going far beyond electoral politics to stand with us, 1000 members of the rabble more or less, against anti-immigrant racism!

Would the unions duck?

Contrary to what the bosses like to tell us, unions are scrupulously democratic. Elected union leaders have to consider every move in terms of how much flak they are going to catch from their members. Consequently, I would have expected them to “lay behind the log” on immigration issues as much as they could. I was wrong again.

On the night that we were at the DFW airport, my good friend Rick Schoolcraft turned up. He’s from my own aerospace local. Gary Livingston, from another aerospace local, had been there all day. His aerospace local probably leans as far right as mine does, but there he was.

The next day, I asked permission to use the Dallas AFL-CIO communications network to encourage more participation at the airport. I couldn’t reach the principal leader, Mark York, but his political director, Lorraine Montemayor, told me immediately to go ahead. So I put it on the web site, sent out 4,000 emails, and used labor’s social media to encourage more turnout.

An hour or so later, I found out why I hadn’t been able to reach Mark York. He was already out there, injured ankle and injured shoulder and all, in the middle of the airport protest! Mark was live-streaming the protests and complimenting other unionists, including Darryl and Stacy Sullivan from the Teamsters, for joining the protests. So much for ducking!

There is a lot of political space between “reasonable immigration/refugee policy” and “Welcome all.” I don’t think the American public is nearly as pro-immigrant/refugee as my radio guest Joshua Hatton or my fellow protesters at the airport. But people are learning fast as we are being prodded by President Trump and incipient fascism.

We learn quickest when we take action. Policy and leadership are emerging, so don’t count out the American people, even on the complicated and difficult issues!

My video of the DFW protests, 3.5 minutes, is on You Tube.

I’m on http://knon.org and 89.3 FM in Dallas every Saturday at 9 Central Time. If you are interested in what I really think, click here.