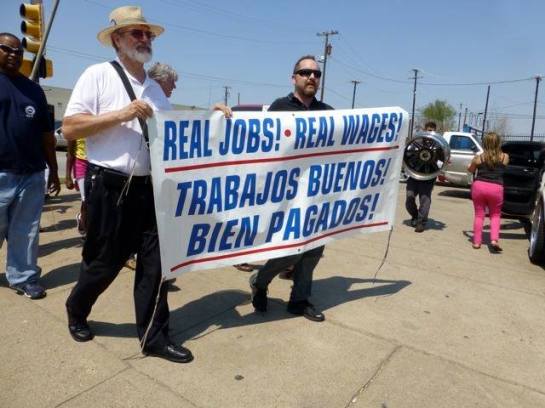 The official report says only 38,000 jobs were added to the U.S. economy in May. Economists say 200,000/month are needed. At the same time, the unemployment rate dropped because so many unemployed people answered “no” when they were asked if they were looking for a job. They call that “dropping out of the labor force.” The participation rate has been really low since 2008.

If they counted the people too discouraged to look for a job and the millions of people forced against their will to hold part-time jobs, the unemployment rate would be 10-11% and it would make a lot more sense.

The obvious solution to the ravages of unemployment is to shorten working hours. One could write an entire history of the United States just on the issue of the fight to decrease the hours of work. The fight reached its zenith with the worldwide political strike of May 1, 1886, which focused on Chicago. They hanged the leaders of the 8 hour day movement.

Unions in the Congress of Industrial Organizations (CIO) demanded lower working hours throughout their history. “30 for 40 with no cut in pay” was their demand, and they kept it up until they disappeared into the AFL-CIO in 1955. Since then, unions have asked for more wages and more benefits, but not for shorter hours. I don’t know why.

Our big partial victory was the 1938 Fair Labor Standards Act, which mandated that employers pay time-and-a-half when hourly workers put in more than 40 hours in a week. They have been fighting over that act since then. The current battle is because President Obama wants more workers to qualify for overtime pay, and the bosses, of course, don’t. They’d like to hang the President, too.