Movie Review, Josh Fox, “How to Let Go of the World and Love All The Things Climate Can’t Change!” 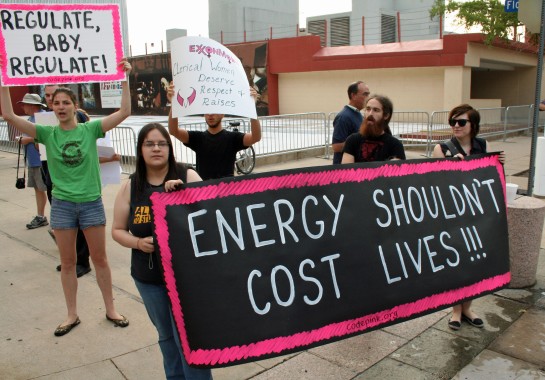 Dallas pickets Exxon at least once a year

Slowly, the environmentalists are winning the argument over global warming. We usually call the other side “climate denyers,” but the real argument is with the extractive industries, especially oil. We’re arguing with multi-billionaire oil men who stand to lose a lot of money if the world ever adopts a sane policy on carbon emissions.

Those oil men are buying professional liars — college professors, scientists, politicians, policy wonks — and even paying to buy the appearance of a grass-roots pro-pollution movement. That’s what we’re up against.

Josh Fox once did a pretty good dramatic movie “Gasland,” with an environmental theme behind the love story. This time, he’s out with a documentary starring himself. One might think it’s rehashing Al Gore’s excellent documentary of a few years ago. I think it was named “An Inconvenient Truth,” and it was quite effective. The new movie is different.

Fox takes a much more personal approach. He films himself going around the world to look at some of the worst aspects of global warming. He also takes a positive approach in showing some of the efforts to fight back. He dances around and celebrates the good stuff, but doesn’t try to pretend that this war is already won.

On the downside, the movie is too long. There are three good probable reasons:

Where are the workers?

Working people don’t want to suffocate any more than anybody else, but most of the folks leading the environmental movement are middle-class, college educated, and fairly affluent. The union movement, to its eternal credit, is working hard to grow a “blue (collar) / green (grass)” alliance. Where I live, the Communications Workers are strongest on environmental issues.

Not all unions are eager to join the environmental movement. Not all non-union workers are, either. If someone is afraid of losing their job over pollution controls, they’ll generally take jobs over clean air any day of the week. It’s a matter of feeding the family in the here and now. No amount of yelling at them will change their minds.

The people we need to focus on and yell at are the bosses in the extractive industries.